You may be thinking it’s easy enough to understand, but but this explanation is just the tip of the iceberg. Blockchain is much more complicated than that and there are many parts that need to be considered in order to adequately comprehend the technology. But that is why this guide is here, to make blockchain easier to understand, whether you are simply interested in the technology, or are trying to understand how cryptocurrency works before you decide to invest in it.

The idea of blockchain was first mentioned in 1991, when Stuart Haber and W. Scott Stornetta thought about creating a system where documents’ timestamps could not be tampered with or backdated. In 1992, they incorporated Merkle trees to the design, permitting several documents to be collected into one block. This part of history often gets overshadowed by the part Satoshi Nakamoto played in the creation of the blockchain technology. 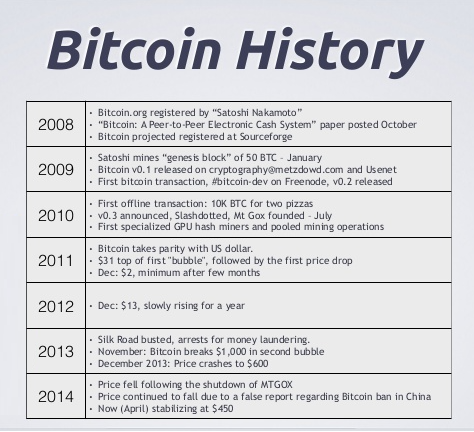 In 2008, Satoshi Nakamoto released the Bitcoin whitepaper called Bitcoin: A Peer to Peer Electronic Cash System, in which they described the digital currency Bitcoin. With the release of Bitcoin in 2009, Nakamoto also solved the issue of double-spending without the involvement of authority parties. While there are many speculations, it is not clear who Satoshi Nakamoto is, or even if it’s a single person. Their identity has been hidden since the very beginning, and still remains somewhat of a mystery to this day.

Over the years, people started thinking that blockchain could be used for more than just cryptocurrency. It could be implemented in healthcare, transportation, voting, etc. However, while it is employed in many fields, blockchain is still primarily known to be used by Bitcoin.

So, the Bitcoin blockchain is basically a public ledger that lists all Bitcoin transactions. In the case of Bitcoin, those transactions are people sending Bitcoin to other people. The so called ledger is not held on some central location, but is rather shared with all computers on the network. Transactions are continually added to the blockchain but for that to happen, they first need to be approved. The devices on the network (the nodes, which we introduced above) need to approve those transactions, which would allow them to be added to the blockchain. The process of nodes approving those transactions if referred to as mining. Miners (the devices doing the mining) approve a transaction and get a reward for their efforts, in this case, in the form of Bitcoin. These miners act similarly to banks in the sense that they check that the sender has the amount they are sending, and ensures there is no double-spending.

Note that mining is done on all blockchains, not just Bitcoin. When the transaction is approved, it is added to a block, which is added to a previous block of transactions, creating a chain of blocks (hence the name blockchain). Because the blockchain is updated regularly for all those in the network, everyone has the same copy of it. With traditional ledgers, if information was lost from the computer it was stored in, there is no way to get it back, unless someone else has an exact same copy of it. With blockchain, because everyone has the same, constantly updated, copy, it can never be lost.

How are transactions approved

When a transaction is made, it needs to be added to a block. First of all, a block is made up of the data, a hash and the hash of the previous block. Since we’re using Bitcoin as an example, the data on the block is a transaction of Bitcoin. A hash is basically the unique signature of the block. In order to create a chain and to make sure the previous block has not been altered, blocks also contain the unique signatures of previous blocks. If a block is changed in any way, its hash changes and no longer matches the hash that is recorded in the following block, thus breaking the chain.

In order to add the block to the blockchain, or in other words approve the transaction, miners need to solve complex mathematical puzzles. They need to guess a number that would produce a result within a certain range when combined with the block data and passed through a hash function. Miners guess the number randomly because it is impossible to predict it correctly. When the number is correctly guessed, it is shared with everyone on the network. If everyone verifies it as correct, the block can be added to the blockchain and the miner gets coins as a reward.

The advantages of using blockchain

Blockchain is decentralized, which means it does not depend on a central server to save data. Instead, the data is saved on all devices participating in the network. On a centralized system, because the data is stored in one location, changes can easily be made to it and the data can be lost. However, when using blockchain, making unauthorized changes to data on one computer would not effect the data on other computers in the network. Decentralization also means no one has more authority over the data than others, and no one can control it. In addition, blockchain technology eliminates the necessity of trusting a third-party to manage the data.

To safely store data not on blockchain, those third-parties spend a lot of money on staff and various security measures. However, with data stored on a blockchain and shared with thousands of computers, there is little room for tampering/hacking.

Once data is stored on the blockchain, it cannot be altered without breaking the chain. If changes to the data are necessary, those changes are stored on a new block. This means that no one can manipulate the data on the block.

It provides a faster way to do operations

In the case of cryptocurrency, transferring money to someone is a much faster. With regular money, banks can take days to process transactions, particularly if the sender and the receiver use banks in different countries. It is also quite expensive, and the cost depends on where in the world you are and where you are sending money to. For example, for someone in the Europe Union, it is much cheaper to make transaction to someone in the same union rather than to one outside of it. Blockchain based cryptocurrencies can be transferred much faster and in much less time.

While there are plenty of advantages of employing Bitcoin, it’s not without its flaws. For example, blockchain based cryptocurrency mining uses up a lot of power, resulting in high energy costs. Currently, Bitcoin mining is using more electricity than 159 countries.

Blockchain can be employed in many industries, and we will provide a few examples.

As we have mentioned above, blockchain allows cryptocurrency to be transferred in a much faster manner and with lower fees. While it could take days for international transactions to come through, transferring cryptocurrency could be a matter of a couple of hours.

Many countries are slow to integrate electronic voting due to fears that they could be tampered with. Hackers could get access to the voting system and influence the outcome in their preferred direction. However, employing blockchain would make everything transparent, allowing anyone to check whether their vote was cast correctly. This would also make tampering with votes very difficult, if not impossible. However, there are many things to take into account, such as how to identify voters but not compromise their personal information. And if blockchain based voting was employed, it should not be forgotten that voter’s computers could be infected with malware that aims to change the outcome of the voting. DDoS attacks would also be a problem.

Using blockchain in healthcare may provide an easier way to manage patient information. At the present moment, important information about patients is scattered around in different institutions. If blockchain was employed, that scattered information could be put into one, always up-to-date entry. It could also allow the patient to have control over which specialist can view what data. For example, you could prevent doctors from seeing information that does not relate to their specialty. So your eye doctor would not have access to data about your sexual health.

In simple words, blockchain is like a public ledger or a database that stores information, and is shared with everyone on the network. So for example, the Bitcoin blockchain would store records of all Bitcoin translations. Everyone has the same copy of the database, and it’s continuously updated for everyone. Changes cannot be made to the database, unless more than half of participants agree on it. The computers on the network add data blocks to the blockchain in the process known as mining.

Depending on who you ask, blockchain is either a fad that will eventually go away, or it’s technology that can bring the much needed changes to many industries. It could be implemented in many industries but it is far from flawless. The blockchain technology is most known to be implemented by cryptocurrencies, but that is not the only industry where it can be used. It could be used to safely employ electronic voting, or it can be used to advance the healthcare system.